Today was by fair our kids’ worst day at Disney. They had a great time but also had many melt down moments. Allie cried on the way to the bus stop because her head was hurting but could not tell me where it hurt or how it got hurt. We got to the Animal Kingdom before it opened today and we were in early enough to see the opening ceremony, sort of, us and several hundred other people. This is when Abby had her first potty emergency. She kept telling me she had to go pee and that she was starting to pee. We finally got in the park and found her a bathroom.

We took a few pictures in front of the Tree of Life and then headed over to Camp Mickey & Minnie to see the Festival of the Lion King. While we were waiting to go in Raymond ran a head and got our Fast Passes for Kilimanjaro Safari. What I saw of The Lion King was pretty good but Abby did not like it. So she had to go potty again, did I mention that her begging to go potty included crying? I am not sure if it was the loud noise or the dark that freaked her out but once we were outside she was fine. While we were waiting for the show to end and Raymond and Allie to come out I let her choose one character to go see. She chose Minnie, so we got our picture made with Minnie. Then we saw that Thumper and Ms. Bunny were out so we got in her line. They had to go in for a few minutes for a snack and when they returned we were first in line to see them and by then Raymond and Allie were out of the Ling King show. 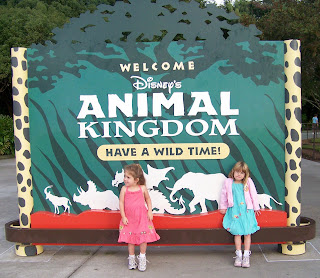 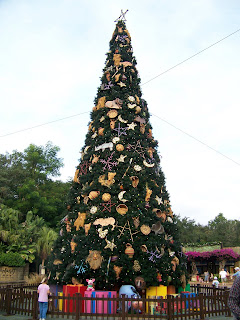 Tree outside the Park 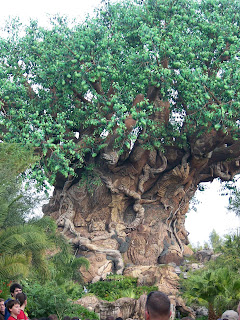 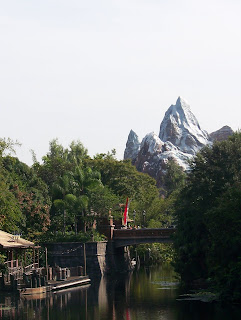 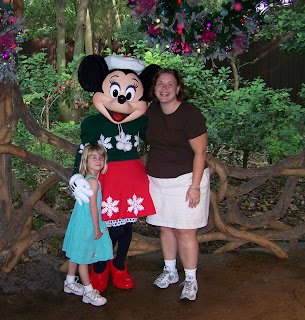 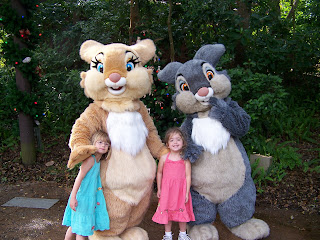 After seeing the bunnies we headed to Africa for the Kilimanjaro Safari ride. I have wanted to do this for as long as I can remember. It was fun and we got to see a white rhino up real close to the truck! The girls enjoyed this as well. After the Safari we did the Pangani Forest Exploration Trail in Africa and the Maharajah Jungle Trek in Asia. After these two trails/trek the girls and I went to walk around the Tree of Life and Raymond went to get a Fast Pass of Expedition Everest. Instead of getting a Fast Pass he was able to ride it 3 times using the single rider line. While he was riding I was talking to a Cast Member about the afternoon parade and she told me that they were only expending 16,000 people in the park today! Oh my goodness!! 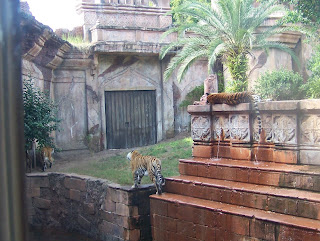 We met back up and went to lunch at the Tusker House in Africa. By having lunch at the Tusker House we had guaranteed seating at the 3:15 Finding Nemo Show. Before we went in I took Abby to the potty. As soon as it started she starting crying that she was about to go pee in her panties. After about 15 minutes of this I finally got up and left (much to Raymond’s dislike, but I was getting dirty looks for those in front of me). We went and found the girls a spot to watch the parade. The Mickey’s Jammin’ Jungle Parade was decked out for Christmas. After the parade we went over to Dino Land where we all rode TriceraTop Spin. Raymond then went to ride Dinosaur and the girls had an ice cream snack. By the time they finished their snack Raymond was back and the park was closing. 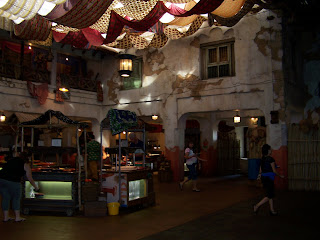 Inside Tusker House ~ Another great meal 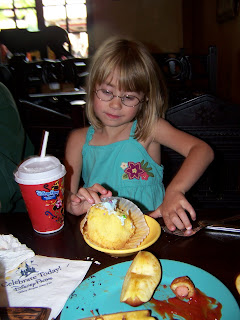 The girls received another birthday cupcake 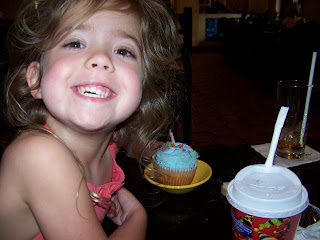 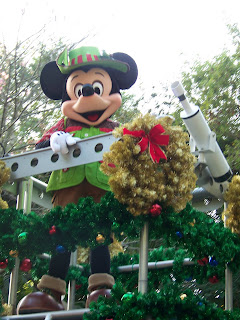 We caught the bus back to our hotel and relaxed the rest of the evening. We packed up our stuff to go home tomorrow. I don’t think I could do another day, I am so tired!!!

The girls said they would like to come back. Allie said when she was 6. Abby said not at 6, that is when we will go to the Incredible Pizza Company! I look forward to coming back one day soon!!

Disney Photo Pass took 155 over the week we were here. Now I have to sort through them all and find a few for our Christmas card!
Posted by Paula Jennings at 8:22 PM