We arrived right as Magic Kingdom was opening. It is a little sensory overload at first. I know more of what I want to do Friday now. We took some pictures on Main Street. I would love one for my Christmas card! We went back to Fantasy Land via Cinderella’s Castle and Raymond went straight to Tomorrowland. We rode Cinderella’s Carousel without any wait, went right in to see Ariel and waited only 20 minutes to ride Dumbo. Then we went to It’s a Small World and the Flight of Peter Pan all without a wait. We meet back up with

.Raymond and he and Allie rode It’s a Small World and Abby and I rode Peter Pan again. They want to ride these both again on Friday.

From here we ran into Pooh and Tigger, they also had Rabbit out with them. We waited about 30 minutes to see them. While we waiting we had Raymond go and get Fast Passes for The Many Adventures of Winnie the Pooh. When he got the Fast Passes for Pooh it gave him 4 Passes to Mickey’s PhilharMagic. This 3D Show scared Abby to death. She kept asking for me to take her out of here. Allie kept trying to grab the things that kept flying at her. Afterwards we went over to ride Pooh and Abby was much better. We had lunch at Cosmic Ray’s Starlight Café and off to Mickey’s Toontown Fair. We visited Minnie and Mickey’s Country Houses and to see the Princesses. It took only 15 minutes to see Sleeping Beauty, Belle, and Cinderella. We chose not to wait 45 minutes to see the Tinkerbell and the Fairies. When we went to see Mickey and Minnie it took only 15 minutes to see them as well. After we came out from seeing Mickey and Minnie, Jasmine was out taking pictures.

Raymond and the girls rode Goofy’s Barnstormer Roller coaster. Allie rode by herself and told me she did not like it at all, she told me “I did not like that ride, it scared me very much.” After the girls played in the playground for a while we walked over to Liberty Square and found a great spot to watch the parade. Before the parade started I took Allie to the bathroom and ran into the Smith’s from church. After the Celebrations parade Raymond went into the Hall of Presidents and the girls and I watched Princess Tiana’s Showboat Jubilee! 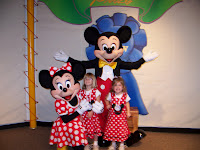 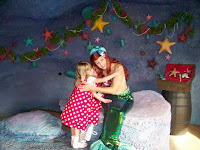 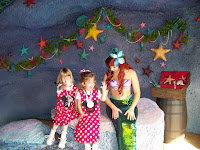 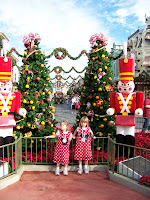 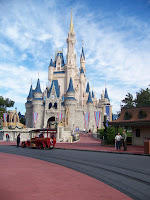 Posted by Paula Jennings at 7:03 PM