Monday morning we woke up at 5am to get ready for our much-anticipated trip. I woke Allie up at 5:30 saying, “Allie, its time to get up. Do you know where we are going today?” She pops up, wide awake and says “’Disney World! Abby we going to Disney World!” Leslie came and got us a little after 6 and off to the airport we went. Going through security was not to bad… It would have been better had we not had to take off our shoes and get the girls juice and water tested. We only had to go potty twice while waiting to board the plane. The girls enjoyed watching the planes take off and land while we waited. 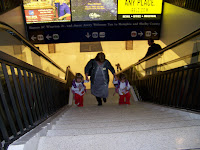 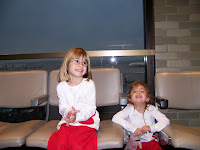 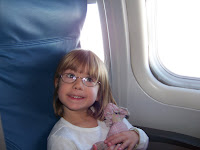 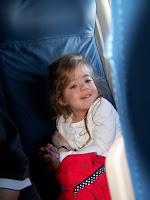 I am so proud of how the girls acted on the plane. Abby was so excited and did really well on the flight. The only melt down moment came when I took her potty and it was really loud at the back of the plane due to the engines. Other than that she only complained about being tired twice. I do think the cabin pressure got to her a little at the end of the flight. I hate the last 25 minutes of a flight when you are slowing going down in altitude. My ears get stopped up and my head hurts. She had 3 suckers, half a roll of sweet tarts and 2 packs of fruit snacks on the flight. Allie also enjoyed flying, she looked out the window almost the entire time. 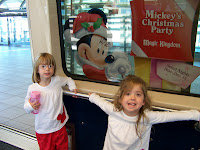 On the tram at the Orlando Airport

After we landed in Orlando we went to the Magical Express check-in and straight to the bus that would be taking us to our hotel. We waited only about 15 minutes before we left the airport. We checked-in to our room at Pop Century and then ate lunch at hotel food court. After lunch we went to Downtown Disney and walked around. I hope to go back Thursday night by myself. I bought the girl’s princess Mickey ears and 3 Christmas gifts. More gifts to purchase on Thursday. 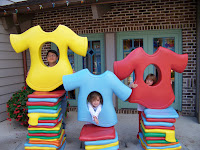 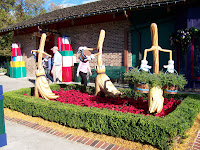 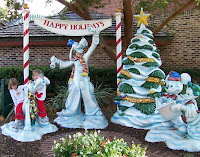 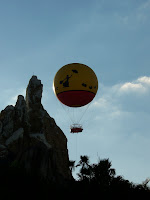 From Downtown Disney we went to the Polynesian Resort for dinner at O’hana (which means family) for a family style Polynesian dinner. I so wish I took a picture of all the food we got. We started off with bread and mixed green salad with a great honey lime dressing, followed by these chicken wings to die for! We had broccoli and loin-main noodles along with grilled pork, turkey, shrimp and beef. It all was melt in you mouth good. Then we had bread pudding with a caramel sauce and vanilla bean ice cream for dessert. The girls were given their very own large cupcakes with Mickey sprinkles for dessert. They even sang happy birthday to them! 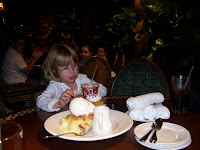 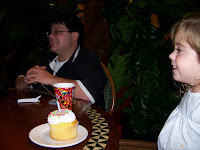 Afterwards we rode the monorail over to Magic Kingdom to catch the bus back to hotel. When we arrived back to our room our travel agent had send us a canvas Disney bag! Everyone was in bed by 9pm EST. Although Allie took forever to go to sleep tonight since she had a nap on the bus to dinner. They had a great first day at Disney and we are looking forward to Epcot and breakfast with the Princesses tomorrow!

Posted by Paula Jennings at 1:11 PM